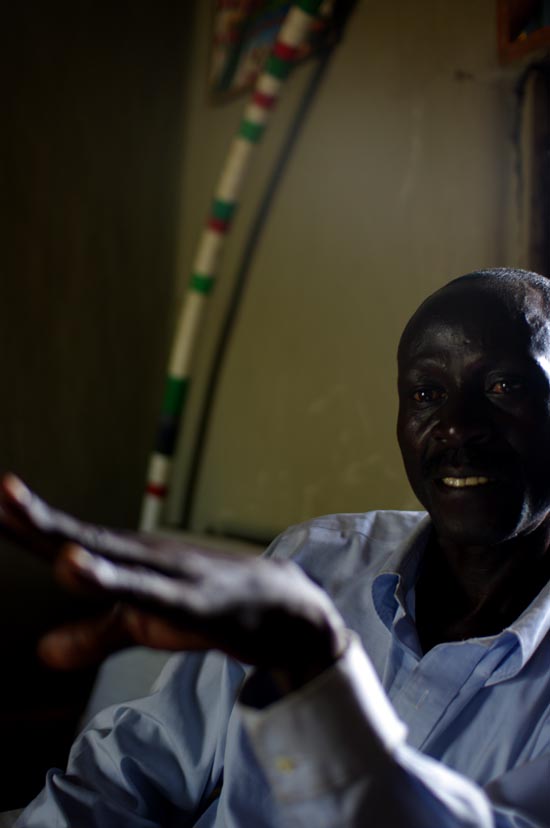 On Tuesday, CLEAR staff visited Kanyapir, a rural settlement outside of Oyugis town. Staff interviewed Peter Otieno Asienyo, one of many Kenyans displaced by the post election violence of December last year. Asienyo described the politics of the election, the violence which followed, and the situation of IDP’s – internally displaced persons.

An estimated 350,000 people are said to have been displaced and 1,200 were killed in the violence which broke out in response to the announcement of election results which named Mwai Kibaki president. Provisions set aside by the government to support and compensate those who lost their homes and livelihoods in the post-election period have not been adequately distributed. Over a year later, many Kenyans continue to languish as the effects of the violence remain unresolved. 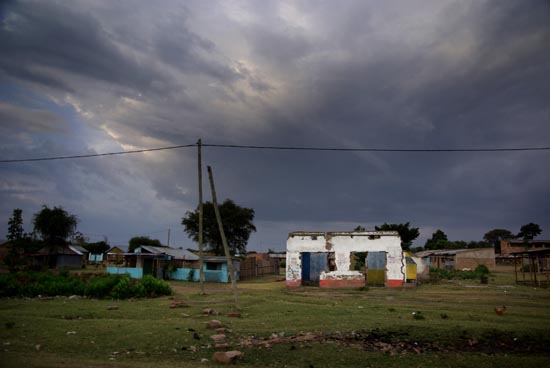 Remains of a building destroyed during the post-election period located outside Kisumu, Kenya

Where were you located at the time of the election?

I was in Naivasha during the post election violence. I went to Navaisha in February 1988. I was blessed to find a job and was able to start my own business. I used to provide scrap metals and construction building materials. I was also the chief campaigner officer for the party supporting ODM (Orange Democratic Party led by Raila Odinga) in Naivasha. Before the election, I was at our party base in Salama. I was then moved to government barracks. I was safe there, but blood is thicker then water and I needed to look for my children.

How did the violence unfold in Naivasha?

On the 27th of December, I was in Navaisha town. It was the day people started to cut off people’s necks. They were looking for Raila’s strong supporters. At around 10 PM, thirty people came to my house with pangas (machetes) and told us to lie down. I ran to save my life. I went to the house of a counselor and contacted a Major to take us to the prison camp. I traced my children and they were safe at school. One of my friends, a white man, went to the school and brought my son. My daughter remained safe at school.

I went to a prison camp at Navaisha where we were safe for a few days. We suffered a lot there. We didn’t have water. For 3 days we did not eat, drink, we could not do anything. There were a lot of people, 8-10 thousands staying at that prison camp. I have many friends that were killed. They were walking in the town and a group came and stabbed them using pangas.

Did you try to return to your home?

We went back to our homes later with prison wardens and found that everything was stolen and burnt.  I had a bicycle, a gas cooker, two sofas, a Sony radio, and a TV. My house, plot, everything was lost.  From my earnings, I bought two plots of land at 340,000 KSH in 1998. They burned everything, I have nothing now. I lost all my belongings.

Where did you go for help?

Sony Sugar, who are very good company and very good Samaritans, sent a lorry to Navaisha going back to Kisumu stadium. It was a difficult journey. There were 70 to 80 of us in the lorry. It rained heavily for most of the journey and our lorry did not have a canvass. But we were safe; we had a police officer in the lorry who escorted us.

We got home by the blessing of good Samaritans who gave us food and tea, and helped us to collect some money. We didn’t have a single cent. Those people collected us and helped us to reach home.

What assistance did you receive from the government?

I was told that I would be given 10,000 KSH in compensation but I never did. We didn’t even receive any food from the government, all the food that was brought was given to family and friends of the chief and counselors. The only food we received was from the Kenyan Red Cross, we got food from them once. I know that there was money set aside for IDP’s but the chiefs and counselors were writing the names of their relatives and friends, and the true IDP’s did not get this money.

I am an IDP, I owned land in Navaisha. We gave our report, and were promised that we would be assisted by the government with some cash and property. We never saw those things, never. I am feeling very bad because before I was not begging, but now I am begging. Before I didn’t sleep without food, and now I am sleeping without food. My children never went to a public school but now we can not afford school fees. I am feeling very bad about the government.

What action do you want the government to take now?

I want so many things. First, my property, my plots. Second, benefits for all that we have suffered. Third, I want a job – any job. I can never go back to work in Navaisha. When I think of going there it seems like I am looking into the darkness, my friends, most of them were killed.

I want the people who perpetuated the violence to be taken to The Hague. They are responsible for the death of innocent people. Kibaki himself should be taken to The Hague. I can’t take them to court because I don’t have the money. Court is money. Those who have money in court can do anything. But we did not get what we were promised, and we are still going to try.