On 9th December 2009, IBJ co-organised a fifth roundtable with APRODH in the province of Cibitoke. The aim was to gather members of the Burundi judicial system- whether lawyers, prison officials, police officers, prosecutors and judges- to discuss the issue of juvenile criminal justice. APRODH’s help was once more invaluable, since it contributed to prepare the event in Cibitoke province, sending invitations to the relevant members of the local justice system. 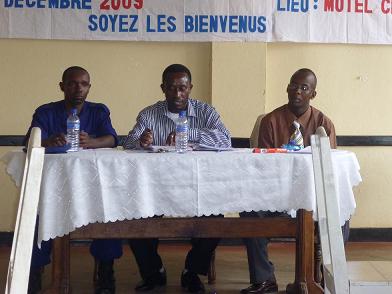 As of the 15th November 2009, a total of 461 juveniles are incarcerated in the 11 detention centres across the country. Among them, more than two thirds are still waiting for their trial. Further, juvenile criminality tends to increase.

This roundtable was thus an opportunity to discuss about this disquieting situation, firstly by identifying its deep causes. However, the main goal of the meeting was to bring members of the justice system together to find out appropriate solutions to the lack of proper juvenile criminal justice system in Burundi. To reach this objective, participants were divided in different groups according to their occupation. This enabled each member of each group to feel concerned about the issue and urged to commit himself, at his own level and within his capacity. Consequently, dialogs concluded with concrete suggestions aiming at ameliorating procedures involving children, finding alternative sanctions to imprisonment, and lastly improving children’s lives while imprisoned. 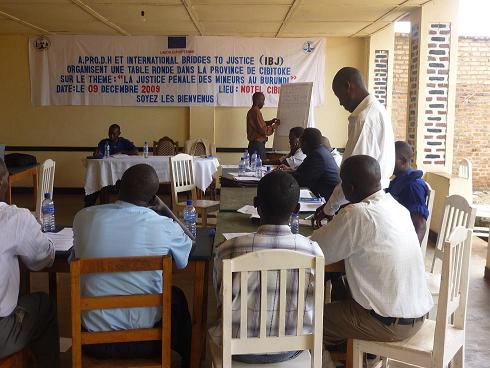 Beside, copies of the new Penal Code and the Legal Defense Manual were distributed to participants. This manual was prepared by the attorney Mehdi Benbouzid with a view to build the capacity of Burundian lawyers to provide quality and committed counsel to clients. The discussions were an opportunity to point out that Burundi had ratified the Convention on the Rights of the Child, which therefore ought to be enforced in the country. IBJ’s lawyer Herman Ndayishimiye brought some copies of the main articles of the Convention to remind the actors of the justice system of the Government’s obligations in terms of the administration of juvenile justice.

The outcome of this roundtable is truly encouraging. IBJ expected concrete commitments of participants, and the goal was reached. In a friendly atmosphere, each participant was urged to feel part of the Cibitoke justice system and ready to make his best to improve it. 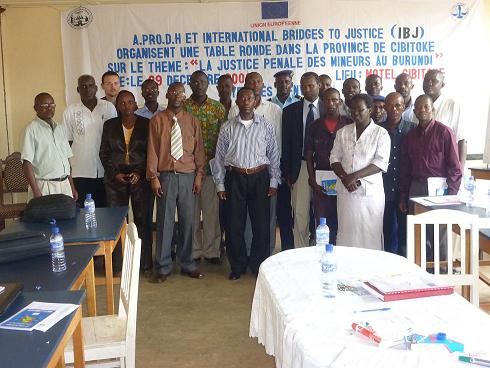