IBJ Zimbabwe made headlines with a roundtable discussion convened for Zimbabwe’s media.  The forum discussion took place on November 2nd in Harare and brought together journalists, lawyers and IBJ Legal Fellows to discuss the role of the media in reporting criminal justice issues. The objective of the meeting was to determine the role of the media, identify the challenges media face in fulfilling their specific role and come up with strategies to deal with these challenges. An appreciation of the meeting and the topic of discussion were shown when the Harare Metro reported on the event on November 3rd.

All attendants felt that the role and challenges had been identified and what’s more, that recommendations that were brought forward could have a direct impact on the criminal justice system in Zimbabwe. Participants indicated the discussions were ‘informative, vital and an eye-opener.’

The participants agreed that the media have power and an important role in influencing public and government policy.  That is why accurate reporting of cases is seen as an important tool and a method of deterrence to keep the system accountable to its own rule. It was highlighted that the Zimbabwean media has the power to influence the nation’s conscience and it needs to be aware of that power. The tendency to report exclusively on highly political cases, leaving the cases of ordinary people unheard, was debated.

The journalists highlighted their need for training on human rights issues, including the right to privacy.  The issue of privacy was further discussed, with journalists commenting that most journalists or editors were unaware that it is inappropriate to expose the identities of victims of sexual violence or their relatives. Legal procedure, human rights and ethics were other areas journalists requested to be trained in. IBJ will therefore look for partnership with schools to explore the possibility, so that journalists can be provided with the desired training.

Another point of discussion was the need for journalists to be seen as partners of the criminal justice system, both to educate the public and to highlight its failings/mistakes and need for reform. The journalists felt that stakeholders within the criminal justice system view the media with suspicion and are reluctant to cooperate. Closer cooperation between the media and IBJ will be a first step towards changing this.

Lack of accessibility to justice, as well as media, was discussed as it is a problem for those who live in rural areas and those who do not speak English and Shona. There are no newspaper distributors in many rural areas, meaning that newspapers reach these places when the news is already out of date.  Radio and television broadcasts also do not cover more than half of the country.

After a lively discussion it was agreed that much needs to be done to improve the role of Zimbabwean media and standards of reporting. In this regard many issues need to be considered. These include continual training, with classes tailored to meet specific needs such as education within specialist areas. The need for a self-regulatory body is also pressing, since Zimbabwean journalists lack any form of professional body, which undermines their ability to control their freedoms. It was also highlighted that journalists and relevant professionals need to cultivate professional working relationships. This way, journalists have experts to turn to with questions or requests for editorials, thereby improving the quality of reporting. To that end the IBJ Zimbabwe team ensured all the journalists present had their contact details and expressed their willingness and desire that journalists get in touch whenever they have any legal questions.

After this fruitful meeting, the first step is to build a stronger relationship with editors in media houses and find out how IBJ can contribute to further training of the media. Participants were enthusiastic about this opportunity and future events, with one journalist saying that he “would not want to miss any, so long as I’m available.” The focus on the media shows that IBJ is committed to approach all actors in the criminal justice system. This way, we can fully contribute and improve the justice systems in the countries we work in. This approach has already borne fruit, as several Zimbabwe newspapers have already reported on IBJ’s work. This shows that we are increasingly driving the focus of the media on ordinary citizens enmeshed in the criminal justice system. 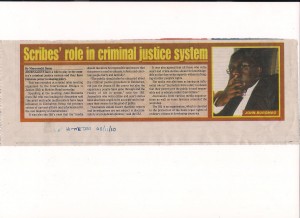 Above: IBJ roundtable made headlines in the Harare Metro on November 3rd, 2010