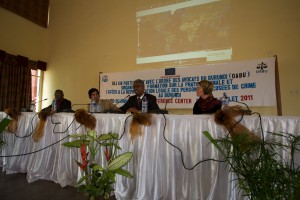 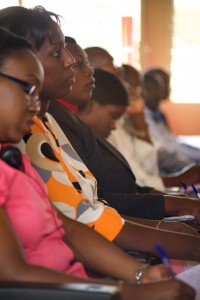 Lawyers in Bujumbura, Burundi learn about building the theme and theory of a case

The first part of the training began with lawyers learning to build a theme and theory of a case and the importance it can play when preparing a case. IBJ’s Training Director, Kellie Krake, provided training on direct and cross-examinations of witnesses. Skills workshops allowed participants to practice what was being taught through a mock crime scene that could only be reconstructed through formulating and asking questions to witnesses. 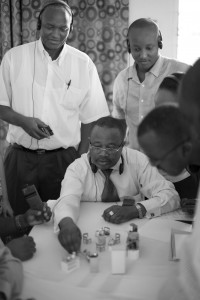 Participants in the training construct a mock crime scene

Moreover, a refresher on various defenses under the Burundian Penal Code, including nullities and implementation, constituted a prelude to develop participant’s creativity into using broader local law resources and international conventions in preparation of strong defenses or in invoking nullities of procedure. IBJ’s Burundian Legal Fellow, Astère Muyango, spoke of the importance of putting in place a competent legal aid system.

The last two days of the training included other participants coming from across the spectrum of Burundi’s criminal justice system. These included magistrates, judicial police officers, and prison officials. A special guest speaker discussed the criminal proceedings involving juveniles. Presentations included international standards and Aline Njimbere, an IBJ Legal Fellow, explored with participants the changes to the Criminal Procedure Code. Mock demonstrations were conducted for participants to identify and discuss irregularities in procedures. 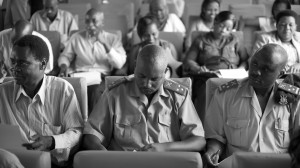 An overarching goal of this training was to strengthen understanding and dialogue amongst the different actors working in the system to build a sense of community with a common purpose, to improve Burundi’s justice system. Participants were encouraged to share their personal stories and values, to imagine the ideal of fairness in the justice system and to identify ways to work towards those ideals, and to pinpoint other issues they are face together as stakeholders in Burundi’s justice system. The training proved to be a great success. Whether it was a new way of thinking, preparing a better defense, or improving their technical skills, almost all participants thanked IBJ for contributing to their professional development.

The Batonnier ended the training with a final inspirational speech and the awarding of certificates to the participants. With all these actors moving together to apply the skills learned and values shared in the training, Burundi is one step closer to realizing the kind of fair and equitable justice system that had been envisioned in the training.