On September 17, IBJ’s Southeast Defender Resource Center coordinated a training with the Rizhao Legal Aid Center of Lanshan’s District Bureau of Justice in Shandong Province. The goal of this training workshop was to inform and train the members of Rizhao’s Legal Aid Center, particularly focusing on the theories and practices of criminal defense for the disadvantaged. Of the 109 participants comprised at the training, there was a vast collection of legal minds, including 45 legal aid lawyers, 52 private lawyers, and one judge. They came from across four cities, in both Shandong and Jiangsu Provinces. There were also eight government officials in attendance, including the directors of each Bureau of Justice from the Lanshan district of Rizhao, Ganyu District of Jiangsu, Wunan District of Weifang, and the port city of Lianyungang. The ceremony opened with addresses from the Directors of the Rizhao Legal Aid Center and the Lanshan District Bureau of Justice. They both expressed their appreciation for IBJ’s contribution to criminal justice and their interest in further cooperation with IBJ for future activities. 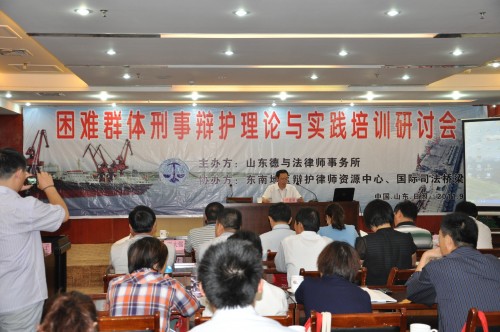 During the morning session, Wuhan University’s Professor Chen Lan made a speech on theories of criminal defense for the disadvantaged. He talked about the challenges generally faced by lawyers, and the problems of Criminal Legal Aid in China. He then went on to introduce the changes made to China’s Criminal Procedure Law (CPL), before shifting to more practical topics, including interview skills and how to defend the accused, according to IBJ’s toolkit. As a part of the afternoon session, Shanquan law firm’s Wan Daqiang made a second speech expanding on the practical skills for defending the disadvantaged. He highlighted the importance of patience and enthusiasm when acting as a defense attorney, as well as the need for comprehensive knowledge of your client. Mr. Wan also went on to praise IBJ’s toolkit, and thanked IBJ for making strides to disseminate the important information necessary to defend the disadvantaged in China. It was rewarding to see how both speakers referred with such praise to IBJ’s toolkit, and even went on to express their own experiences of working with the disadvantaged and using IBJ’s strategies. It was clear that those in attendance were affected by the speeches, which led to animated conversations and discussions regarding IBJ’s strategies and their effect on criminal defense in China. 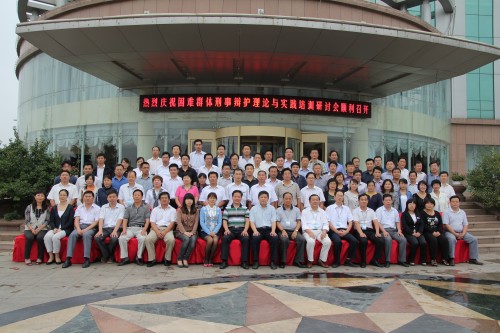 All attendees come together for a photo

As a result of the training workshop, a union called the Lu Su Lin Gang Lawyers Union, made up of 12 law firms from four cities across two provinces, came into existence. This union has agreed to work cooperatively, and share the resources and information necessary to protect the rights of the disadvantaged. Those in attendance, as well as those here at IBJ, considered the event a comprehensive success.