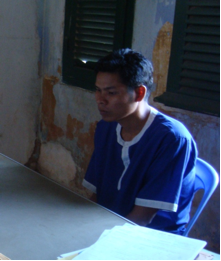 Cambodia ratified the UN Convention Against Torture over 18 years ago. Torture, however, remains the simplest and cheapest mechanism to extract a confession. Mr V is evidence that this practice is very much prevalent in the Cambodian justice system today.

On 12 February 2011, Mr V was called to the police station for questioning over a stolen ring. After giving his statement explaining that he was receiving medical treatment for his injured leg the police held him overnight in a tiny cell. The next day, the police continued to question him. Mr V maintained his innocence. Irritated, the police threw Mr V to the ground and began to kick him in the ribs, head and back. Enduring these barbaric acts, Mr V was forced to confess to a crime he did not commit.

During an interview with IBJ, Mr V described how he wanted to commit suicide, banging his head on the table, because he simply did not commit the crime.

Mr V was then formally arrested for a felony offense and taken to Kampot Provincial Prison[1] where he was forced to share a room, 15x15m2, with 60 other prisoners – a mix of pre-trial detainees and the convicted. Nine months later he is still awaiting trial. A month after Mr V’s arrest, the case was referred to IBJ at which point he was for the first time informed of his legal rights. 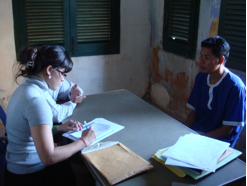 Under Cambodian law, all felony and juvenile cases are to be represented by lawyers. Although the Bar Association of Cambodia has established a legal aid referral system for these types of cases, funding is so limited that lawyers cannot always be provided. What happens in these circumstances is that a judge cannot proceed with the trial and the accused would remain in prison until a lawyer could be appointed, or more simply, indefinitely.

Moreover, without access to a lawyer, Mr V would never be able to prove that his confession was forced. A judge simply would not believe him and he would have remained in prison, unable to collect evidence to prove that he was tortured. By the time he came to trial his bruises would have faded and scars would have healed – all but the scar in his memory.

Because of IBJ’s intervention in this case, Mr V’s confession will be challenged. Moreover, on 3 November 2011, a judge ruled that IBJ could provide two witnesses to testify to Mr V’s innocence. This will happen on 17 November 2011. While Mr V remains in prison, now he has some hope. None of this would have occurred without the thorough investigation of IBJ’s Investigator Mr Vanny nor the representation provided by IBJ’s lawyer, Mr Vibol. 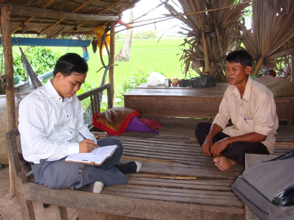 IBJ’s Investigator Mr Chan Vanny, interviewing the Commune Chief as a witness for the client.

* Kate Flower is a volunteer with the Australian Youth Ambassadors for Development (AYAD) Program. The AYAD Program is part of Australian Volunteers for International Development, an Australian Government, AusAID initiative.

[1] On IBJ’s visit dated 3 November 2011, there were 424 prisoners.  The prison is estimated to have maximum capacity of 160.  Kampot’s provincial prison is therefore grossly overcrowded at 265% capacity.