In Burundi, women who’ve been accused of crime can be forced to endure horrific conditions of incarceration, even without any charges proved. Due to persistent cultural norms, women can often be at an even greater disadvantage than their male counterparts when trying to fight the charges against them. Their helplessness, and the hopelessness of their situation, is only further exacerbated by their lack of access to legal representation. Without lawyers advocating on their behalves, their voices are left unheard or ignored.  This was certainly true in Selene’s case, until one of IBJ’s Legal Fellows in Burundi, Maître Janvier Ncamatwi, took on her defense. 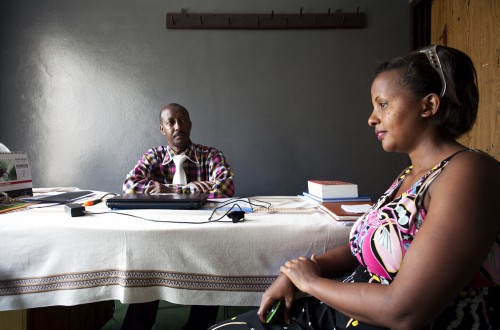 Selene and Maître Janvier at IBJ's office in Bujumbura

In January 2010, Selene’s employer accused her of embezzlement. He provided a statement to the police and Selene was subsequently arrested and put in pretrial detention. Her denial of the accusations were completely ignored. Selene explains, “These were his words against mine, and that was enough to send me to prison without even having a trial.”

Selene was detained in prison over 100 kilometers from her family, including her two young children, which made her life in isolation even more difficult. Due to the poor conditions in prison, Selena’s health deteriorated and she had to be hospitalized several times. As the months passed, Selena was self-represented at court hearings and attempted to defend her case. Despite the fact that her former employer did not even bother to appear in court to substantiate his accusations, the charges against her, and her imprisonment, were maintained.

The law in Burundi provides that accused persons should not be held in pretrial custody for lengthy periods of time if there is a lack of evidence to support the charges. There is a great disparity, however, between the law and its implementation. Essentially, Selena was languishing in prison despite there being no competent evidence to prove her guilt. With no access to a lawyer, Selena had, in her words, “lost all hope.”

In June, Maître Janvier visited the women’s prison as part of a program developed by IBJ Burundi to address the legal needs of minority groups such as women and children who are being held in pretrial detention. This is where he met Selene. Previously unaware that she had a right to be represented by a lawyer, Selene was grateful that someone would listen to her story, and was uplifted by the possibility that justice could be done. 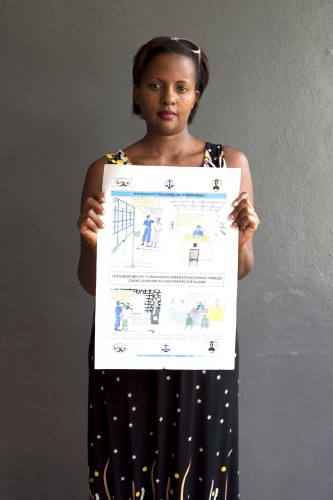 Selene holds up a rights awareness poster prepared and distributed by IBJ's team in Bujumbura.

Janvier promptly secured hearing dates and represented Selene at court appearances. He was able to overcome the typical inefficiencies in Burundi’s court system and managed to schedule Selene’s hearing the same day as other matters he had pending before the court.

During the case’s late autumn hearing, her accuser’s representative argued that a sentence of six months imprisonment would be appropriate punishment. At this point, Selene had already been imprisoned for over 12 months! Janvier helped Selene understand the choice she had to make, between continuing to fight against the charges and hoping for her eventual exoneration, or accepting an unjust verdict that would result in her immediate release from prison. Selene understood the choice, and took the opportunity to regain her freedom.

Selene was exhausted by the endless processes of the criminal justice system which had treated her so unfairly. She longed to get back to her two young children and the life she once enjoyed. Even after suffering through a year of imprisonment for a crime she did not commit, Selene considers herself lucky.

Selene’s story exemplifies the many shortfalls in Burundian criminal justice, where the basic right to a fair trial is not afforded due respect. It also illustrates how the intervention of an IBJ lawyer can give voice to marginalized people, and provide hope to those who have been abandoned by an uncaring and unforgiving system.