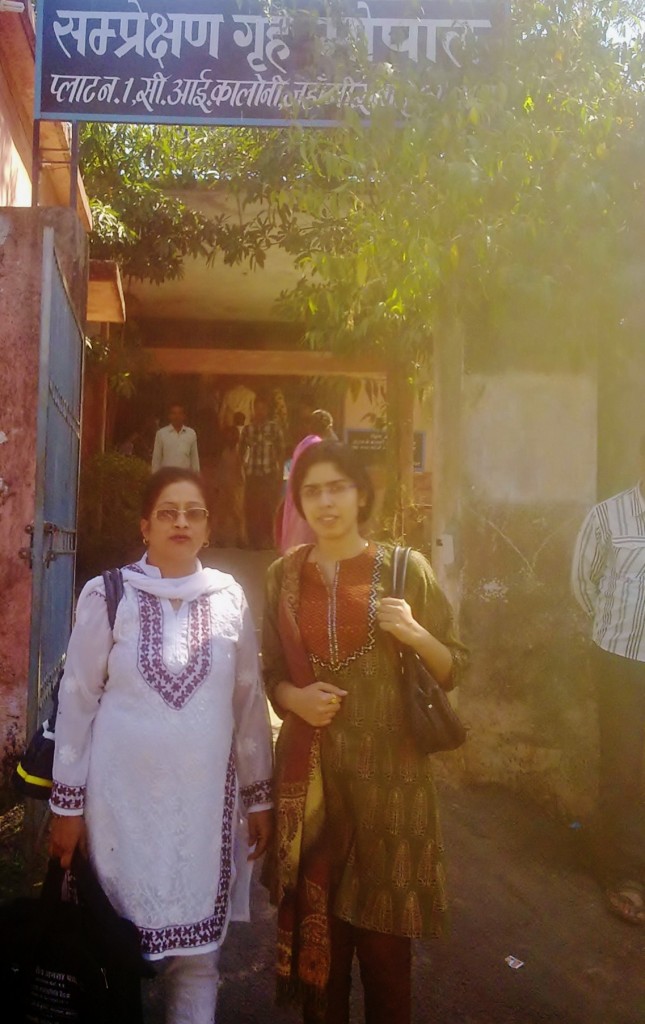 JusticeMaker Garima Tiwari (right) and Ms. Nikhat Ali, an experienced lawyer, at the juvenile justice board in Bhopal, India.

A recent report in The Times of India highlighted that more than 35 juveniles in Bhopal alone are waiting for trial for serious crimes such as rape or murder. With absolutely no mechanism in place in the state to counsel such children so that they do not take to crime in future, juvenile homes seem to be at the bottom of the government’s priority list.

There are 18 observation homes in Madhya Pradesh with a capacity of 50 people each. As per the Juvenile Justice act 2000, the cases are disposed of by the juvenile justice board, which is comprised of a magistrate and two social workers. The Bhopal-based board is dysfunctional, since there is only one magistrate and no social workers on the jury. A magistrate comes twice a week to hear cases and record statements of the witness.

Keeping this in mind, I made a visit to the board. The court is held in one room where there are few chairs for advocates and court staff, but there is no place for juvenile offenders and their families to sit. There were no private advocates, and no social help groups to help them understand the procedures. Despite the chaos, the Magistrate was very cordial.

Most of the offenders were poor and illiterate, with no one to help them with the complex legal paper work.  With the help of advocate Nikhat Ali, who runs the non-governmental organization Muskaan and is also a Panel Advocate at the Juvenile Board, we were able to speed up the process of six matters in hearings held on 13th March 2013.  Ms. Nikhat Ali is a highly experienced lawyer practising criminal law in Bhopal and is now a pillar of the JusticeMakers team.The matters concerned custody, warrant cancellation and compromise.

Sometimes poor, illiterate people fall into the trap of shrewd lawyers who  try to make money out of their ignorance. Somehow there are many people who  keep running around from lawyer to lawyer to get a solution to their problem, and they end up selling their land, house and all their possessions to pay for the whole legal procedure. Legal technicalities make these people suffer.

For instance, in one of the bail matters, a juvenile in conflict with the law had hired a private advocate who drafted the bail application.  There were no court stamps, affidavits or notarization as required on the application, and  the advocate charged high fees to the offender’s family . On top of this, the advocate did not appear on the date of hearing. When the court clerk informed these people that the application was drafted incorrectly, they were completely lost–they were very poor , illiterate and totally unaware of the legal procedure. They called the lawyer they had appointed, who said that he will re-draft the application but required more fees.

Because we were present there, we talked to the lawyer and asked him to return the money. Since there were issues of professional negligence involved, he conceded.  Such practices by lawyers is one of the factors which has caused a lot of mistrust in the criminal justice system.Ultimately, the party handed over the case to us and we filed the correct bail application.

From drafting simple applications to compromise agreements, the day ended on a happy note, with many children in conflict with the law leaving with more trust in the legal process.