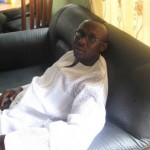 As a criminal defense attorney in Asaba, Nigeria, Henry Nwaka has witnessed the abuses and rights violations constantly suffered by people living with HIV/AIDS within the criminal justice system of Nigeria.

People living with HIV/AIDS are given entirely different treatment from other detainees and accused persons in Nigeria’s criminal justice system.  At times, They are even denied the basic right to be present in court and for their hearing.

He worked for the passage and implementation of a law laying out this legal framework through lobbying efforts and the organization of a public hearing with key stakeholders. The passage of this law will provide all key stakeholders with the knowledge they need to properly treat PLWHA within the criminal justice system and will give them options for redress if their rights continue to be violated.

He also visited police stations, prisons and courts in order to increase the awareness about the fundamental human rights of people living with HIV/AIDS.

The reluctance that, initially, police officers showed towards the Project is well-demonstrated by the words of one of them who asked Mr Nwaka why he was willing to help people who were already under a sentence of death because of their HIV/AIDS condition. In other words, the police officer defined the Project as a “suicide mission”. However, with the passing of time and the hard work of Mr Nwaka and his team, police officers completely changed their attitude and started to collaborate.

In the realization of his project, Mr Nwaka was supported, among others, by the Nigerian Bar Association and the Human Rights Lawyers Network. He has also collaborated with a 2008 JusticeMakers Fellow,  Patrick Dunkwu.