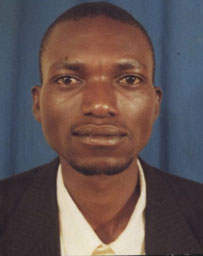 Evans Muswahili has witnessed firsthand the failure of the Kenyan criminal justice system to protect the basic legal rights of everyday citizens. After observing widespread impunity for serious offenders alongside harsh punishments for petty offenders, Evans became committed to working towards criminal justice reform. Evans has pursued this passion in the past by organizing civic education activities on justice delivery, working with the Kenyan government to publicize the services of the judiciary available to the public, and assisting the Center for Law and Research International with community mobilization.

Evans has a degree in Community Development, and has contributed significantly to the broader goal of social and environmental justice. He worked as a community tree nurseries manager with the World Agro forestry center, served on the Board of Governors of Madira Girls Secondary School, and was a member of the National Working Group, which formulates standards for forests certification. He also worked as a teacher from 1996 to 2006, and has experience in teaching students at the high school level. Now, Evans is dedicated to working almost full-time on volunteer projects. Despite the modest income from his volunteer work and having to rely solely on his wife’s salary, Evans remains committed to social, legal, and environmental justice.

Evans became particularly passionate about justice sector reform after witnessing the suffering of friends and family, often at the hands of the malfunctioning criminal justice system. The police had arbitrarily arrested a close friend and colleague of Evans when he happened to pass by a crime scene. Despite pleading not guilty, he was sent to a local prison as a remand prisoner. While in prison, he contracted a disease and passed away within a week. This incident touched Evans profoundly and demonstrated to him the clear need for change within Kenya’s criminal justice system. Evans realized that ignorance about criminal justice procedures was widespread in his community, and that the rule of law was often unenforced.

Evans hoped to focus specifically on gender-based injustices because he has observed firsthand the struggles faced by women, who are often marginalized in society and lack access to justice. From a young age, Evans saw that women faced daily difficulties like discrimination and domestic violence – yet many times were afraid to speak out due to social stigma and lack of knowledge about how to take the case to court. These experiences have motivated him to work tirelessly towards ensuring that all women have access to court and are able to properly defend themselves if they suffer from injustices.

In the Vihiga District of Western Kenya, gender injustices resulting from a host of traditional beliefs and practices remain ubiquitous, while the rule of law remains unenforced. Due to rampant corruption and the vicious cycle of impunity, minority groups and women are often denied access to justice. Moreover, the police lack the training and the proper forensic tools to properly investigate crimes. Public officials, elders, and village chiefs often collaborate to prosecute suspects through illegal courts due to the inefficiency of the judiciary, often disproportionately charging women – especially in poor areas. Women and minority groups face lack of access to courts; discrimination at the hands of administrators like chiefs, corrupt judicial officials, employers, and clan and family elders; and suppression under regressive cultures continuing practices like forced wife inheritance, female genital mutilation, and underage marriage.

Evans used his $5,000 JusticeMakers Fellowship to conduct an advocacy and civic education campaign seeking to build the capacities of key stakeholders like judges, public administrators, village chiefs, and police forces, to work towards better access to justice for women and other marginalized groups. The campaign was mainly composed of seminars, road shows, and radio talk shows. Evans also organised forums allowing judicial officers, public administration officials and the public to interact with one another, with the intention of encouraging these various parties to collaborate on improving the criminal justice system. Victims of torture, arbitrary detainment, and abuse – especially women – have received education on their legal rights, while judicial officials were educated on their responsibilities. The public administration and judicial systems were being lobbied by Evans to break from the tradition of unfair adjudication in cases involving marginalized groups. Through education, the project also sought to end the culture of illegal courts, rampant corruption, and impunity.